Last year, football fans in Nevada bet a whopping $99 million on the Super Bowl. Gambling is legal there, but those bets are only the tip of the iceberg.

The Super Bowl, which this year will be held in New Jersey on February 2, is arguably the biggest 1-day betting event in the world, with fans wagering on everything from the winner and point spread to the length of the National Anthem. All told, industry watchers estimate that some 200 million people will bet more than $10 billion on this year’s event in legal and illegal venues. 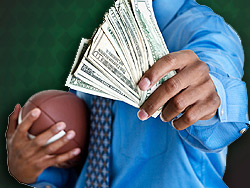 For most of those bettors, the wagering amounts to added excitement and a few dollars one way or another. But the big day is far from benign for the estimated 6 million Americans with gambling disorders.

For people addicted to gambling, the Super Bowl is a siren’s song: a desperate chance to get ahead or dig out of a hole they’ve already dug. It’s a tantalizing opportunity to feed a habit that can lead to financial ruin, criminal activity, destroyed relationships, and health problems.

Although gambling addiction is a chronic condition that can contribute to myriad health problems, including depression, substance abuse, ulcers, angina, and hypertension, it generally doesn’t attract a lot of attention from the healthcare community. But physicians who are concerned with treating the whole patient may want to reconsider that oversight.

“The biggest misconception about gambling addiction is that it’s not an addiction at all, that it’s not a disease but a financial or a moral problem and not a condition for the medical community,” says Keith Whyte, Executive Director of the National Council on Problem Gambling (NCPG). “Those were the same attitudes people had about substance abuse 30 years ago.”