Both the recent Super Bowl and the upcoming NCAA basketball tournament (March Madness) are huge events on the calendar of American sports fans. They are also sporting events with a tremendous amount of betting commonly associated with them. 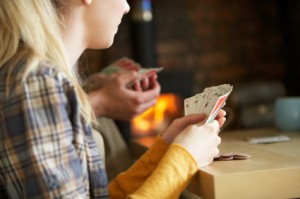 Unfortunately, there are people who have great difficulty making a friendly wager and moving on. For some, the urge to gamble becomes strong and begins to take over many aspects of life. When the problem becomes serious, people can begin to lose money, possessions, relationships, even their health.

Adults are not the only ones who are susceptible; in reality, adolescents are two to four  times more likely to develop a problem with gambling than adults (Gupta and Derevensky, 2000). The N.Y. Council on Problem Gambling reports that teens who gamble are:

What makes the risk of gambling problems greater for teens? The following characteristics, typical of teens, increase this risk for all adolescents:

You can help your teens avoid the consequences of problem gambling by letting them know, first of all, that it does come with serious consequences. Brainstorm with them to find other, more appropriate outlets for their natural risk-taking and propensity toward excitement. Work with them to identify other ways to assert their individuality and to connect with their peers.